A mythology of Dada Saheb Phalke

In which we keep time in years, each [Year] like a woman's saree, gathering so much into its pleats. Each Year aware that it is a lie, wanting to be a bundle of planted eyes at a factory, seeking wakefulness to everywhere at once. Each Year aware that at most, it is a net of holes,or maybe eyes,thrown over a consciousness of that which we simplify by calling it time.

We shake the bottoms of our nets and hang our meagre catch to dry: frozen photographs and alphabets strung across some pages. We try to preserve them by calling them into our eyes. I wait for a carbon arc to jolt in contact up in a black box inside, where are those dried fish? We are about to make a new shadow play.

A needle appears in sky. Threading mind it begins to stitch upon the waters 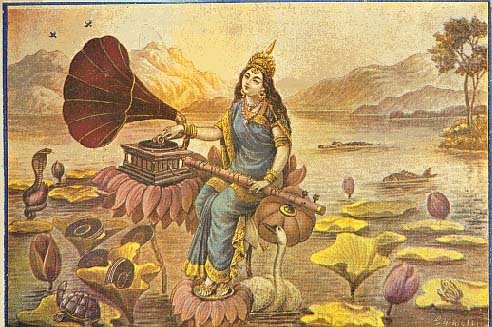 O Saraswati who sinks into lotus like dew, we invoke you, parent, child, friend dear enough to be either.. again and again, putting a needle in those old grooves, letting them scratch, loving archivist of our creaking sounds.. teach us the patience to look carefully and wide, to gather too much and to know how to store in our stories, carefully, lovingly, beautifully.. the multiplying thoughts that overwhelm us, so that we might one day say, I drew the Wave

The very vanity of the enterprise, when it finally makes me move, pulls me in further, and me and Me and mee. Like a large gathering of locusts, we scatter, making a new sky

"So many things happening, so many stories one inside the other, with every link hiding yet more stories... and I have hardly hatched from my egg" thought an exultant Garuda, heading north. At a place with no living creatures. He would stop and think things over there. excerpt from the first chapter, Ka, by Roberto Calasso.

Argus (Juno makes him watch after the beautiful heifter, which, unknown to her, is a beautiful maiden rapied and transformed by her husband Jupiter) had a hundred eyes, all around his head. Two eyes would rest at a time, keeping t the others open. (from Ovid's Metamorphosis. http://tikaboo.com/library/Ovid-Metamorphosis.pdf

A timeline must be fed. What is the shape of the monster?

A time line of postcards

World History Timeline studying the world between the wars [6]