British India Issues commence with the Paper Currency Act of 1861 which gave the Government the monopoly of note issue in India. The management of paper currency across the geographical expanse of the Indian sub-continent was a task of considerable proportions. Initially the Presidency Banks were appointed as agents to promote the circulation of these notes in view of their existing infrastructure. The Act of 1861 authorised the Presidency Banks to enter into agreements with the Secretary of State for becoming agents for the issue, payment and exchange of promissory notes of the Government of India. The problem of redemption of these notes over vast expanses of the Indian sub-continent led to the concept of 'Currency Circles', where these notes were legal tender. These Currency Circles increased in number as the Government progressively took over the work. The agency agreements with the Presidency Banks were finally terminated in 1867. The Management of Paper Currency was subsequently, in turn, entrusted to the Mint Masters, the Accountant Generals and the Controller of Currency. Victoria Portrait Series The first set of British India notes were the 'Victoria Portrait' Series issued in denominations of 10, 20, 50, 100, 1000. These were unifaced, carried two language panels and were printed on hand-moulded paper manufactured at the Laverstock Paper Mills (Portals). The security features incorporated the watermark (GOVERNMENT OF INDIA, RUPEES, two signatures and wavy lines), the printed signature and the registration of the notes. 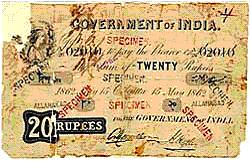 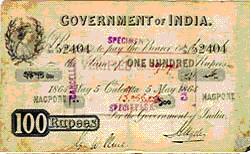 British India Notes facilitated inter-spatial transfer of funds. As a security precaution, notes were cut in half. One set was sent by post. On confirmation of receipt, the other half was despatched by post. 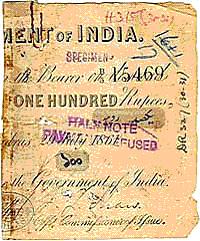 Underprint Series The Victoria Portrait series was withdrawn in the wake of a spate of forgeries and replaced by the unifaced 'Underprint Series' which were introduced in 1867. In deference to public demand, notes in the denomination of Rupees Five were introduced. Initially, notes were legally encashable only in the Currency Circle in which they were issued; however, between 1903 an 1911, notes of denomination 5, 10, 50 and 100 were 'universalised', i.e. were legally encashable outside the Currency Circle of Issue. The Underprint Series notes were printed on moulded paper and carried 4 language panels (Green Series). The languages differed as per the currency circle of Issue. Language panels were increased to 8 in the Red Series. The improved security features included a wavy line watermark, the manufacturer's code in the watermark (the source of much confusion in dating), guilloche patterns and a coloured underprint. This series remained largely unchanged till the introduction of the 'King's Portrait' series which commenced in 1923. 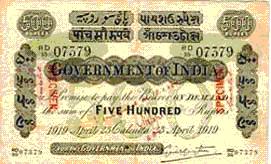 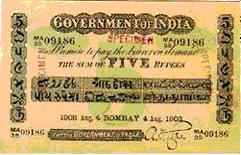 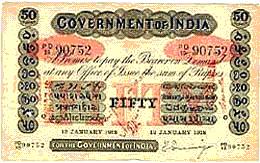 Small Denomination Notes The introduction of small denomination notes in India was essentially in the realm of the exigent. Compulsions of the first World War led to the introduction of paper currency of small denominations. Rupee One was introduced on 30th November, 1917 followed by the exotic Rupees Two and Annas Eight. The issuance of these notes was discontinued on 1st January, 1926 on cost benefit considerations. These notes first carried the portrait of King George V and were the precursors of the 'King's Portrait' Series which were to follow.

King's Portrait Series Regular issues of this Series carrying the portrait of George V were introduced in May, 1923 on a Ten Rupee Note. The King's Portrait Motif continued as an integral feature of all Paper Money issues of British India. Government of India continued to issue currency notes till 1935 when the Reserve Bank of India took over the functions of the Controller of Currency. These notes were issued in denominations of Rs 5, 10, 50, 100, 500, 1000, 10,000. 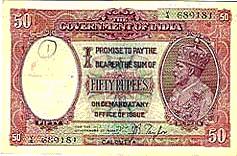 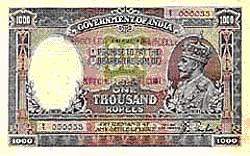 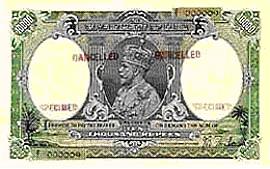 With the establishment of the Currency Note Press at Nasik in 1928, currency notes came to be progressively printed in India. By 1932 the Nasik Press was printing the entire spectrum of India currency notes. The improved security features were changed watermarks, intricate portrait designs and multicoloured printing. British India: Reserve Bank Issues The Reserve Bank of India was formally inaugurated on Monday, April 1, 1935 with its Central Office at Calcutta.

The first Central Office of the Reserve Bank of India It began operations by taking over from the Government the functions hitherto performed by the Controller of Currency and from the Imperial Bank the management of Government Accounts and Public Debt. The existing Currency Offices in Calcutta, Bombay, Madras, Rangoon, Karachi, Lahore and Cawnpore became the branches of the Issue Department of the Bank. (It was not then considered necessary to have an office in Delhi.). Section 22 of the RBI Act, 1934, empowered it to continue issuing Government of India notes till its own notes were ready for issue. The Central Board of the Bank recommended that the Bank notes retain the general size, appearance and design of the existing notes, albeit with modifications. Notes with the portrait of Edward VIII were scheduled for release in the summer of '37. But Edward's heart had its reasons and his abdication, at levels mundane, delayed the Bank's issues to January 1938 when the first Five Rupee note was issued bearing the portrait of George VI. 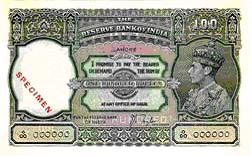 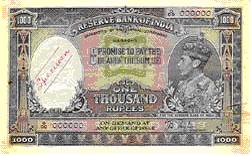 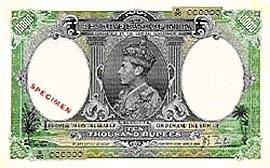 The first Governor, Sir Osborne Smith did not sign any bank notes; the first Reserve Bank issues were signed by the second Governor, Sir James Taylor.

In August 1940, the one-rupee note was reintroduced, once again as a war time measure, as a Government note with the status of a rupee coin, in terms of the Currency Ordinance of 1940 (IV of 1940). The issuance of Rs 2 and Annas 8 was contemplated but Rs 2 was introduced instead on 3rd March , 1943. 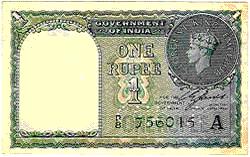 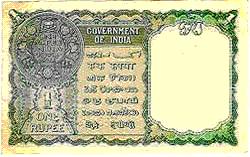 Sir C. D. Deshmukh This necessitated a change in the watermark and obverse design from the profile portrait of George VI to his full frontal portrait. As an added security feature, the security thread was introduced for the first time in India.

The George VI series continued till 1947 and thereafter as a frozen series till 1950 when post independence notes were issued.