The return to painting backdrops 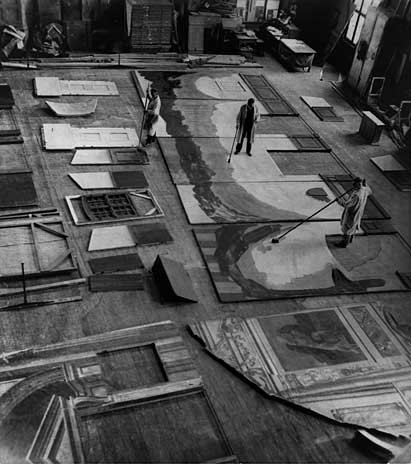 this time making Kailasa out of a mountain around Kolhapur

A piece of sound can strike through the centuries, that lie across each other in layers of time, layers of rock. sheets of aam papad.

Waajid Ali Shah had thought of this sound as word, as sentiment, when he was forced to leave his beloved Lakhnau. Where he had made his practice necessary- of dancing the raas leela as kathak, the skirts of the nawab gracefully touching the billowing skirts of the adjacent dancers, the gopis.

One day a large man would let into his open eyes, those paintings of the Nawab: sometimes a hovering head over a chestful of the most delicately embroidered flowers, the nawab's left nipple*, like the largest one in the meadow, flower and more than flower, peering out of the kurta, provocatively declaring the necessity of pleasure; or the more staid portrait at his tomb, where he looks like a gruff, proud old man, neverthelss bearing muslin that will always fall softly on the skin. And even in staidness,the nipple. That day, having let those images in, Amjad Khan would dance within the loose folds of whitemuslin and Wajid Ali would dance within him.

But that was on a morrow. Maybe when the moon was Allan Sealy's sliver of garlic shining over the silver pencils of Lakhnau.

But this year, now, a man who liked to look sensual in his photographs, reveals a simpler side as he walks across a moving camera in a sultry Bombay studio, holding a harmonium, singing that song live, bringing it alive like never before, and perhaps, never again. People might well close their eyes forgetting the image, in the darkness of the theatre.

Deep from within a well where, past the honeyed walls of alcohol, the voice strikes a timeless spring- a chashma - where history can be the mere reflection it should be.

The gramaphone needle will tease out of the vinyl the ancillary sound of a finger at a tabla, at a loss in face of that voice, barely hitting the taut skin. And the well of the gramaphone horn will crackle with the sounds of playback, the waves finding their heads cut off as they rise, and still that voice flows out, protected, like a bemused baby in a basket, let loose in the waters of a messy river.

" The film opens with the spectacle of her( Durga Khote) pirate crew capturing the royal ship that carries the Princess Nandini, the daughter of the royal family that SDaudamini is fighting. Her speech to the captures prince ( translated by Neepa Majumdar)

After my marriage I came to understand that woman is slave to man. The law says it, religion supports it, and the state puts its stamp of authority on it. My heart broke when I realised that truth and in that instant, I vowed to eradicate our slavery. Even if you become queen sopmeday, you still won't escape this slavery. You will have become the lesser half of your husband. This means that you will have to act according to his wishes.. If you go against his wishes you will be punished. As queen you might overcome your status as a woman, but as a wife, your status will remain even worse than a slaves'... I have begun the task of tearing up this system and replacing it with equality between men and women in order to create a new image of freedom"

Also, a debate with an old man about how to go about the fight- violent or non violent means

"Acchyut Kanya'; a critique of the caste system was coupled with a similar critique of traditional forms of medicine, village justice, and moral codes, against which were placed modern medicine, ( practiced by the gorcer) and the impersonal law of the state, enforced by the police who intervened at the end.

on its payroll- ( which year?) director Franz Osten and cameraman Josef Wirsching

meant to be replaced once they had trained others. Often led to criticism about the nature of their films- the Indian spirit lacking..