________________________________________ The concept of a typewriter dates back at least to 1714, when Englishman Henry Mill filed a vaguely-worded patent for "an artificial machine or method for the impressing or transcribing of letters singly or progressively one after another." But the first typewriter proven to have worked was built by the Italian Pellegrino Turri in 1808 for his blind friend Countess Carolina Fantoni da Fivizzono (as established by Michael Adler in his excellent 1973 book The Writing Machine); unfortunately, we do not know what the machine looked like, but we do have specimens of letters written by the Countess on it. Numerous inventors in Europe and the U.S. worked on typewriters in the 19th century, but successful commercial production began only with the "writing ball" of Danish pastor Malling Hansen (1870). This well-engineered device looked rather like a pincushion. Nietzsche's mother and sister once gave him one for Christmas. He hated it.

Much more influential, in the long run, was the Sholes & Glidden Type Writer, which began production in late 1873 and appeared on the American market in 1874. 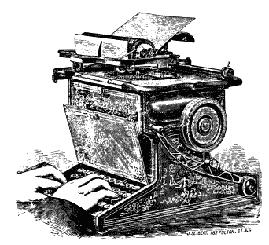 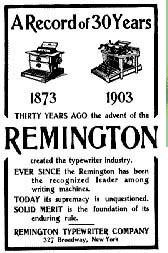 Christopher L. Sholes, a Milwaukee newspaperman, poet, and part-time inventor, was the main creator of this machine. The Sholes & Glidden typed only in capital letters, and it introduced the QWERTY keyboard, which is very much with us today. The keyboard was probably designed to separate frequently-used pairs of typebars so that the typebars would not clash and get stuck at the printing point. The S&G was a decorative machine, boasting painted flowers and decals. It looked rather like a sewing machine, as it was manufactured by the sewing machine department of the Remington arms company. For an in-depth look at this historic device, visit Darryl Rehr's Web site "The First Typewriter." The Sholes & Glidden had limited success, but its successor, the Remington, soon became a dominant presence in the industry.

The Sholes & Glidden, like many early typewriters, is an understroke or "blind" writer: the typebars are arranged in a circular basket under the platen (the printing surface) and type on the bottom of the platen. This means that the typist (confusingly called a "typewriter" herself in the early days) has to lift up the carriage to see her work. Another example of an understroke typebar machine is the Caligraph of 1880, the second typewriter to appear on the American market. 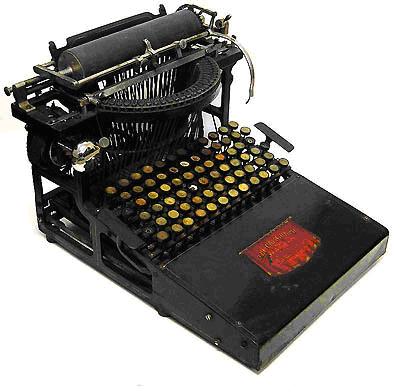 This Caligraph has a "full" keyboard -- separate keys for lower- and upper-case letters. Click here to read more about the Caligraph. The Smith Premier (1890) is another example of a full-keyboard understroke typewriter which was very popular in its day. Click here to read more and see the machine. The QWERTY keyboard came to be called the "Universal" keyboard, as the alternative keyboards fought a losing battle against the QWERTY momentum. (For more on QWERTY and to learn why "QWERTY is cool," visit Darryl Rehr's site The QWERTY Connection.) But not all early typewriters used the QWERTY system, and many did not even type with typebars. Case in point: the ingenious Hammond, introduced in 1884. The Hammond came on the scene with its own keyboard, the two-row, curved "Ideal" keyboard -- although Universal Hammonds were also soon made available. The Hammond prints from a type shuttle -- a C-shaped piece of vulcanized rubber. The shuttle can easily be exchanged when you want to use a different typeface. There is no cylindrical platen as on typebar typewriters; the paper is hit against the shuttle by a hammer. 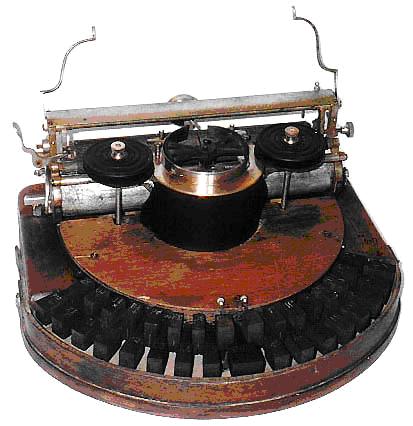 The Hammond gained a solid base of loyal customers. These well-engineered machines lasted, with a name change to Varityper and electrification, right up to the beginning of the word-processor era. Other machines typing from a single type element rather than typebars included the gorgeous Crandall (1881) ... 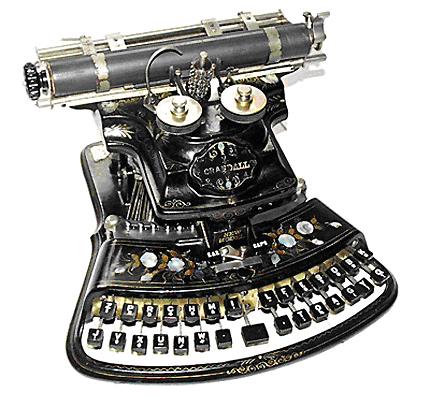 ... and the practical Blickensderfer. 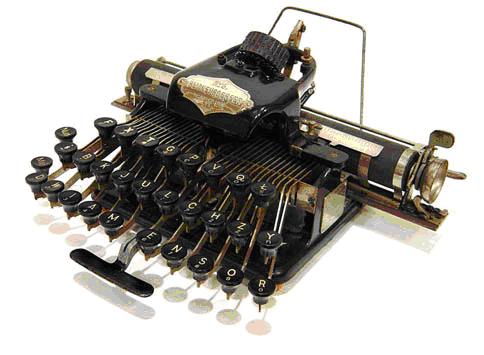 The effort to create a visible rather than "blind" machine led to many ingenious ways of getting the typebars to the platen. Examples of early visible writers include the Williams and the Oliver. The Daugherty Visible of 1891 was the first frontstroke typewriter to go into production: the typebars rest below the platen and hit the front of it. With the Underwood of 1895, this style of typewriter began to gain ascendancy. By the 1920s, virtually all typewriters were "look-alikes": frontstroke, QWERTY, typebar machines printing through a ribbon, using one shift key and four banks of keys. The most popular model of early Underwoods, the #5, is still to be found everywhere. 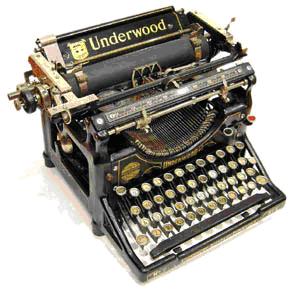 Let's return for a moment to the 19th century. The standard price for a typewriter was $100 -- comparable to the price of a good personal computer today. There were many efforts to produce cheaper typewriters. Most of these were index machines: the typist first points at a letter on some sort of index, then performs another motion to print the letter. Obviously, these were not heavy-duty office machines; they were meant for people of limited means who needed to do some occasional typing. An example is the "American" index typewriter, which sold for $5. Index typewriters survived into the 20th century as children's toys; one commonly found example is the "Dial" typewriter made by Marx Toys in the 1920s and 30s. Much more could be said about the hundreds of makes of early typewriters -- but I'll restrain myself. To get some different perspectives, try looking through my collection list or my wish list. To bone up on the topic yourself, check out the typewriter-collecting resources.