As soon as you enter the world of fairy tales and myths, you become aware of recurring character types and relationships: questing heroes, heralds who call them to adventure, wise old men and women who give them magical gifts. Threshold guardians who seem to block their way. Shape shifting fellow travelers who confuse and dazzle them. Shadowy villains who try and destroy them. Tricksters. In describing character types and symbols, and relationships, Jung employed the term archetypes. Ancient patterns of personality that are the shared heritage of the human race.

There may be a collective unconscious; similar to personal unconscious. The archetypes are amazingly constant throughout all times and cultures, in the dreams and personality of individual as well as in the mythic imagination of the entire world. The concept of archetype is an indispensable tool for understanding the purpose or function of a character in a story. Becoming aware of the archetype can only expand your command of your craft.

The archetypes can be thought of as marks worn by the characters temporarily as they are needed to advance the story. A character might enter the story performing the function of herald, then switch masks to function as trickster, a mentor and a shadow.

Another way to look at the classic archetype is that they are facets of the hero’s personality. The other characters represent possibility for the hero- for good and ill.

She learns from the other characters, fusing them into a complete human beings who has picked up something from everyone she has met along the way.

Facets of the Hero’s personality.

Another way to look at the classic archetypes is that they are facets of the hero’s (writer’s) personality, for good or ill. A hero sometimes proceeds through the story gathering and incorporating the energy and traits of other characters. She learns from the other characters, fusing them into a complete human being who has picked up some thing from every one she has met along the way

The archetypes as emanations of the hero. 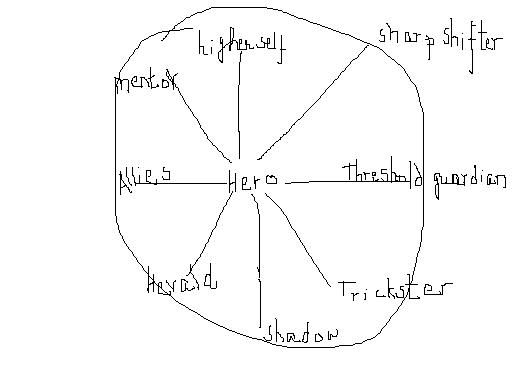 The archetypes can also be regarded as personified symbols with various human qualities. Every good story reflects the total human story, the universal human. Conditions of being born into this world, growing, learning, struggling to become an individual and dying. Stories can be read as metaphors for the general human situation, with characters who embody universal, archetypal qualities.

The archetypes that occur most frequently in stories, and are useful for the writer are Hero, mentor, threshold guardian, herald, sharpshifter, shadow, trickster.

Question: What psychological functions or part of the personality does it represent? What is the dramatic function in the story?

Hero:- to protect and to serve We are on a mission from god (Blue Brothers)

A hero is someone who is willing to sacrifice his own needs on behalf of others. Self sacrifice.

Psychological function: ego. That part of the personality that separates from the mother. That considers it self distinct from the rest of the human race. Ultimately the hero is one who is able to transcend the bounds and illusion of an ego. The journey of many heroes is the story of that seperation from the family or tribe, equivalent to a child’s seperation from the mother. Then ego’s search for identity and wholeness. In the process… of becoming complete… we are all heros facing external guardians, monsters, and helpers. In the quest to explore our own minds we find teachers, guides, demons, gods, mates, servants, scapegoats, maters, seducers, betrayers and allies, as aspects of our personalities and as characters in our dreams. All the villains- friend or and foe of hero can be found inside ourselves. The psychological task we all face is to integrate these separate parts into one complete, balanced entity.

The ego, the Hero thinking she is separate from all these parts of herself, must incorporate them to become the self. (aatma svaprakriti vyakti/ samashti)

Dramatic functions 1. audience identification- hero is to give the audiences a window into the story. To identify with. To merge with him and see the world of story through his eyes- He has a mix of universal and unique characteristics.

Growth Another story function of the hero is leaving or growth. Heroes overcome obstacles and achieve goals, but they also gain new knowledge and wisdom. The heart of many stories is the learning that goes on between the hero and the mentor, or a hero and a lover, or even between a hero and a villain. We are all each other’s teachers.

Action His will and desire is what drives most stories forward.. Sacrifice Heroes are strong and brave, but these qualities are secondary to sacrifice- to give up some value- on behalf of an ideal or a group.

Dealing with death. True heroism is shown in stories where heroes offer themselves on the altars of chance, willing to take the risk that their quest for adventure may lead to danger, loss or death.

Heroism in other archetypes. The archetype became manifest in other characters. In Star Wars Obi wan knobi clearly manifest the archetype of the mentor through most of the story. But, he acts heroically and temporarily wears the mask of the Hero when he sacrifices himself to allow Luke to escape the Deathstar. A gallant villain, heroic in some ways, and despicable in other, can be very appealing. Archetypes are expressions of the parts that make up a complete personality.

Varieties of heroes. Willing. Unwilling. Group-oriented. Loner. Anit-heroes, tragic heroes. Or they can become temporarily another archetype. The hero may also express dark or negative sides of the ego.

Anti hero- 1. characters who behave much like conventional heroes, but are cynical, have a wounded quality. 2. tragic hero.

The Road of Heroes. Heroes are symbols of the soul in transformation. And of the journey each person takes through life. Of any kind- innocent, orphan, martyr, wanderer, warrior, caregiver, seeker, lover, creator, destroyer, magician, sage and the fool.