Setubandhan showed that Dadasaheb's creativity and skill in regard to trick photography was extraordinary. In that movie a giant's head is severed from the body and reattaches itself to the body by weird powers. The audiences of those times were astounded, seeing it. In Imperial Studios Dadasaheb had to shoot the scene of a waterfall. He asked for a lot of sand and some heaters.

Seeing the fuss and fluster, the people in the studio joked, 'The old man has lost his mind'. No one could imagine what he was going to do with all the sand and the heaters. Dadasaheb, by skilfully throwing the sand constantly on the artificial waterfall in the studio, created spray as in a real waterfall and with the heaters he created the sound ef¬fect. Seeing this scene on the screen, everyone was dumb¬struck. Dadasaheb had made the artificial waterfall real. In the filming of Setubandhan and, later, Gangavataran, Dadasaheb's son Babarai proved his merit. Dadasaheb felt certain that Babarai would carry forward his tradition. He had that mental satisfaction and wrote an article in Mouj praising Babarai's prowess. But fortune frowned. Dadasaheb did not have this pleasure for long. Death swooped on Babarai prematurely and the Phalke family was subjected to another fatal blow. Mention must be made of Dadasaheb's one more trick scene in Setubandhan, which shows his artistic perspective for true representation. He had made artificial stones of card¬board moulds that floated on water and appeared real on the screen. As the scene was shot imaginatively from a par¬ticular angle, the monkey-army appeared to be crossing the sea over them right into the horizon. In order to make the scene realistic, Dadasaheb did much of the shooting at Rameshwar. Setubandhan had taken two years to complete. By that time, the era of talkies had opened in India by the screening (14th March 1931) of Imperial's Hindi talkie Alam Ara. In a year's time, Ayodhyecha Raja of the foremost Prabhat Film Company and, incidentally, the first talkie in Marathi, was screened (6th February 1932). A week earlier, its Hindi version had been screened. This first talkie of Prabhat was making waves all over India. Sensing that silent movies had now no future and in view of the fact that the fifteen-year agreement with Dadasaheb was coming to an end, Wamanrao Apte decided to dissolve the company. Not only did he pay the workers' salaries to the last paisa, but also gave them a bonus equal to an year's salary and retired hon¬ourably from the cinema industry. A large-hearted director of a film company like him will not be born again. As Setubandhan was a silent movie, it was difficult to get a theatre to screen it as the talkies had captured all the theatres. What next, was a big question. Hindusthan Film Company was closed but, like other members of the staff, Dadasaheb too had received full month's salary plus a year's salary as bonus. Ardeshir Irani of Imperial Film Company suggested a way-out by adding sound to Setubandhan in his studio. Dadasaheb acted on it. It cost forty thousand more. Dadasaheb Phalke was thus also the first to dub a movie. However, this movie was dubbed in Hindi. It was 1934 when Setubandhan was screened, that is, it took three long years. It could not survive the competition of other movies and the huge expenditure incurred on it was a loss. Dadasaheb was again overtaken by financial problems. Thereafter Dadasaheb experimented with enamelling and ceramics. His products were awarded jrrizes by the princely state of Aundh and at the Industrial Exhibition in Mumbai. Although the expenditure on Setubandhan was sev¬enty-five thousand rupees, much of it was recouped by the screening of the silent movie in the south in 1932. However, due to the loss of two years in adding sound to it, the ex¬penditure incurred on the addition was a burden on Dadasaheb due to the failure of the movie at the box office. 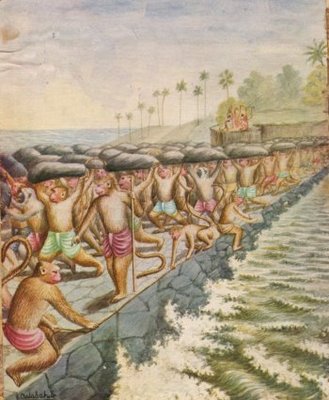