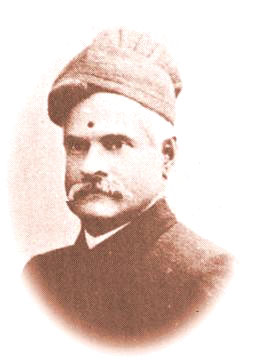 An artist who is credited with bringing about a momentous turn in the art of India, Raja Ravi Varma inexorably influenced future generations of artists from different streams. He was the first artist to cast the Indian Gods and mythological characters in natural earthy surroundings using a European realism; a depiction adopted not only by the Indian “calendar-art”- spawning ubiquitous images of Gods and Goddesses, but also by literature and later by the Indian film industry- affecting their dress and form even today. His dazzling oil paintings of India’s ancient glory delighted turn-of-the-century India and his mass reproductions through oleography reached out to the Indian populace in an unprecedented scale. 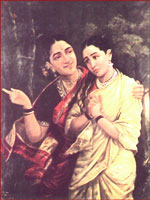 Born on April 29, 1848, in Kilimanoor, a small hamlet in the southern state of Kerala, Ravi Varma belonged to a family of scholars, poets and artists. Noted in his family were, among others, Vidwan Koil Tampuran, author of the famous Kathakali work Ravana Vijayam, Raja Raja Varma, who painted after the Tanjore style, and Uma Amba Bai Tampuratty, who, composed Parvati Swayamvaram, a work for the Tullal dance. As only a small boy, he filled the walls of his home with pictures of animals, acts and scenes from his daily life, which though irked the domestics, were noted by his uncle, Raja Raja Varma as the signs of a blossoming genius. 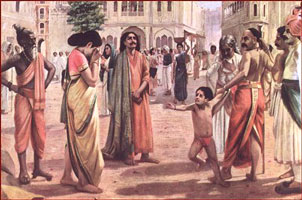 The uncle, himself a Tanjore artist, not only gave the first drawing lessons to Ravi Varma, but also took a keen interest in his further training and education with the help of the ruling king, Ayilyam Thirunal. When a young boy of 14, Ravi Varma was sent to Thiruvananthapuram where he stayed at the Moodath Madam house of the Kilimanoor Palace and was taught water painting by the palace painter Rama Swamy Naidu. Here Varma’s talent was nurtured by the personal interest of Ayilyam Thirunal who exposed him to the famous paintings of Italian painters. Ravi Varma had been using the indigenous paints made from leaves, flowers, tree bark and soil which his uncle Raja Raja Varma prepared for him. His first set of oil paints was brought from Madras after noticing a newspaper advertisement. Excited and nervous, he handled the paints he had waited for a long time.

Varma’s next dilemma was learning to paint. This dilemma may seem incongruous more than a century after he started to paint, but the medium was very new and the technique equally elusive in those days. Only one person in Travancore knew the technique of oil painting - Ramaswamy Naicker of Madura, who, recognizing a potential rival in Varma, refused to teach him the know-how. Naicker's student, Arumugham Pillai would actually sneak into Moodath Madam at nightfall to share his knowledge with Varma, against his teacher’s wishes. This clandestine education was only supplemented by watching a visiting Dutch portrait artist who painted the portraits of Ayilyam Thirunal and his wife. Through trial, error and hard work, Ravi Varma worked with the pliable medium, learning to blend, smooth and maneuver the flexibility that was afforded by this slow drying substance.

When Varma himself painted the portraits of this royal couple, this self-taught artist’s blazing talent far outshone the Dutchman! Ravi Varma’s creativity was further tampered by listening to the music of veterans, watching Kathakali, going through the manuscripts preserved in ancient families and listening to the artistic interpretations of the epics. Ravi Varma’s fame as a portrait artist soared with several important portrait commissions from the Indian aristocracy and British officials between 1870 and 1878, and the sensitivity and immense competence this artist still remains unsurpassed. His clever portrayal would add elegance to the personality of the protagonist, like unmasking the fragrance of a flower. The small town of Kilimanoor was compelled to open a post office, as letters with requests for paintings arrived from every where. The recognition that Ravi Varma received in major exhibitions abroad was for the portrait-based renditions, which were meticulous compositions of people, their demeanor and attires. 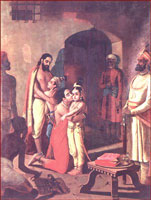 These works finely blended the elements of the early Tanjore custom of painting Nayikas (the feminine emotions being the central theme) and the graceful realism of European masters. In 1873 he won the First Prize at the Madras Painting Exhibition and he became a world famous Indian painter after winning in 1873 Vienna Exhibition. Though not really qualified for the title of a Raja, when an imperial citation happened to come across in the name of Raja Ravi Varma, the name stuck and stayed.

Besides portraits, and portrait-based compositions, Varma now embarked on honing an oeuvre for theatrical compositions based on Indian myths and legends. " Nala Damayanti", " Shantanu and Matsyagandha", " Shantanu and Ganga", "Radha and Madhava", " Kamsa Maya", "Shrikrishna and Devaki", " Arjuna and Subhadra", " Draupadi Vastraharan", " Harischandra and Taramati", "Vishwamitra and Menaka", " Seetaswayamvaram", " Young Bharat and a Lion Cub", " The Birth of Sri Krishna", ' Keechaka and Sairanthri' took new forms under his skillful brush.

With oil paints applied thickly, Ravi Varma created lustrous, impasted jewellery, brocaded textures, and subtle shades of complexions. Though several folk and traditional art forms of India since time immemorial subsisted as illustrations for religious narratives, yet, illusionist paintings as a medium for story telling was Ravi Varma’s invention. He cleverly picked the particularly touching stories and moments from the Sanskrit classics. Though often considered as lacking in overall congruity, by the sheer mastery of painting beautiful areas and expressions, his compositions would enchant the beholder no end. Ravi Varma was convinced that mass reproduction of his paintings would initiate millions of Indians to real Art, and in 1894 he set up an oleography press called the Ravi Varma Pictures Depot. For photo-litho transfers, the Pictures Depot relied on Phalke's Engraving & Printing whose proprietor, Dhundiraj Govind Phalke, became famous as dadasaheb of Indian Cinema a few years later.

In 1894 and 1888, Ravi Varma and his younger brother C.Raja Raja Varma took a tour around India, in search of images and landscapes for inspiration. On his return from the second tour, Ravi Varma painted a batch of pictures especially for reproduction at his new press, the Picture Depot. The aristocratic orientalism in his imagery was now replaced by a little more folkish, more iconic and more marketable forms, and also seen was a crises of gender identity of contemporaneous European forms.

The Calendar-Art thus brought-forth by Ravi Varma has been the origin of lakhs of gaudy god-pictures by ultramodern litho presses for decades. Raja Ravi Varma died of diabetes on October 2, 1906, in his Kilimanoor Palace home overflowing with friends, relatives, dignitaries and the media. Yet, the rich heritage of the fragrance of his paintings continues to charm and influence the art of India.