Kansa was Krishna's uncle, brother of his mother, Devaki, who might have been a good man, but for trying to find out his future. Once the soothsayer spoke, the decree of death was out there.. One of his beloved sister, Devaki's children was going to kill him.

Unable to kill his sister, Kansa imprisoned her with her husband Vasudeva and killed every child that came forth, hurling it to the ground. Thus each birth added to his evil.

Krishna was born on a night made blue by the sudden strokes of lightning that flashed across the sky. The rains poured down, and Devaki's husband saw the prison door open in an unmistakable sign. He put the baby in a small kitchen basket used to seperate wheat from chaff, he waded across a raging river with the child on his head, and left him in Gokul, at his sisters'. 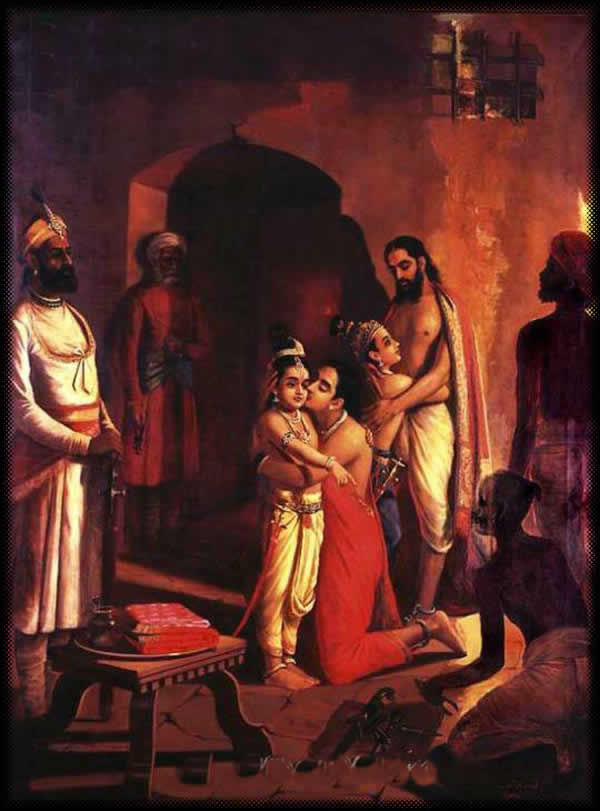 I did roles in Dadasaheb’ s two films, Krishna Janma and Kaliamardan. In Kaliamardan, he gave me the central role of Krishna. I was only six or seven years old, yet Dadasaheb said that only my maternal uncle should do my makeup, no one else. He did not like it if I mixed too much with the boys. He lovingly called me Sonu.

Dadasaheb got a short film made showing him, mother and us ( children) sauntering in a park. Before actually acting in films, he taught me how to show emotions like anger, love, joy, fear etc. and made me act accordingly. He would do it himself for me to see. At the time of actual shooting, he would do the acting and I would imitate him. When he said, ‘Go on,’ the camera would start and I would act out the scene. When he said ‘Stop’, the camera and my acting would stop. However I was not allowed to enter the studio at other times. After I got married at the age of fourteen, my association with the studio became less and less, even though I lived in Nashik!

shot of brother and sister by waterfall- an association

In a circle, a chakra, and in the chakra, in a double exposure, a child krishna, thin lipped, looking 'confident', gives us a sideward glance.

Then a crowd of people at a slight angle, camera a little below their eye level, looking up, at them and the water across them and then beyond, a masked area of frame. The intertitle about how when prayed to devoutly, godly help is always at hand less of the people in the next frame, similar to the first in some ways- only the tops of the heads and their outstreched hands showing.. and above the waters, a roll of clouds which looks photographic, somewhat but also resemble a painted backdrop that is moving left to right. into this layered stage, another image appears A Shesh Naag emerges- the new layer of image if superimposed bit by bit, so it looks like Vishnu is emerging from the waters. Vishnu looks cheerful swinging his Sudharshan Chakra almost, which takes a little time to revolve around the tip of his finger like it must. Laxmi sits quiet. Behind him, on a fine set piece of a lotus on a curved stalk that has managed to seat a child, is Saraswati. To make sure we notice.. Vishnu and Laxmi look at Saraswati. Vishnu proposes his solution. Another block frame dissolved on.. the shesh naag with Vishnu now holds a little krishna on his flute. The shesh naag is dressed up- a crown for each of his five heads. You can see the board where Vishnu sat, where Krishna now stands. The flanks of the snake, its coils are so very beautifully rendered, spotted on top, with serrations below, large coils move around each other letting a fine tail hang- like a ladies bun. The grateful crowd, reverse angle, shot with full sun on their faces, belonging to the world as we know it, before the image returns to its magic. Krishna sits down, abruptly, in a match cut.. shakes his head a couple of times obligingly, kohl large over his child's eyes and puts his flute to his lips and begins rocking.( he looks like Sharmila). His toes move, his foot crossed over the other foot, shakes. (Krishna always crosses hislegs, here in comfort, standing, in godly comfort in an unlikely position- standing on all toes). There is Krishna in long shot, shaking his head a bit less vigorously, and Shesh Naag is rocking his own head too. Dissolve back to Vishnu, Shesh Naag still rocking.. and then, slowly, Vishnu image fades out.

The back of a nayika, bun in place, bent over as she is swinging a wooden cradle, we cannot see the face of the baby. the spotted dark cloth with all the light parts shining.. the baby's cloth too, is of a pale colour. She slowly lifts up her head- a dissolve- a baby krishna and cow appear out there..

Kansa loses his head, rolls his eyes up and over the black matte blur that looks like black blood itself, the head comes down and settles itself on Kansa's torso.. he feels his neck with his fingers in the same mid long shot- he has just settled himself comfortably on a bench and has thrown his long locks back.. to check that it is indeed restored. He gestures with a finger- indicates how it seemed to have gone up and down and yells out a -silent- yell. Immediately ( he is standing in shot now) two wives come on either side and slipping their arms under his, prop him up ( beautiful image). He takes a few staggered steps backward.. the younger wife's face is revealed as she turns in the direction of his gaze- a young boy's fleshy, pretty face. Kansa again in one fourth of an experimental frame-- on the left the same window- in a different angle.. afore, a transparent pillar- double exposed.First the pillar disappears. Then Srikrishna as a baby appears where the pillar was. jump cut. He stabs Kansa with his flute- across the imaginary wall. Then another man replaces him (jump cut/stop block), an older krishna, with a chakra, making the same stabbing motion. ( how does Kansa's hand cross that line of suture between the two sides of the room?) The pillar re appears, no longer transparent? And then in multiple exposures, children around his chaise. And then the sequence unifying the castes- the nationalist attempt- devotees of each denomination come and bow before a lissom long haired forest nymph like Krishna.