Janaki was the daughter of Janak, she had been found sleeping in a furrow in the field, the womb of her mother, Earth. Janak had raised her, showered her with love and wanted her to marry only a man who was deserving of her.

Janak organised a swayamvara to which beautiful princes, middle aged kings, and some old beavers also came. What they had in common was a haughtiness, a certainity of being regal and therefore being entitled to win the hand of the princess who had a reputation for unusual wisdom and perhaps beauty. Besides, Janak was a powerful king.

Janak had placed a large bow in the centre of the meeting hall. The bow belonged to Shiva. The bow lay across a bowl of water, in which floated the reflection of a revolving fish that was suspended from the ceiling overhead. The contestants had to shoot the fish while looking into the water and thus prove an unusual suppleness and grace that accompanied the male prowess that was required to lift that massive bow.

Janak really loved his child, he was choosing well for her.

They came one by one, and they tried. Most of them failed at lifting the bow at all. The overly built men among them would manage to lift the bow, but would never manage to shoot: the overbuilt body had lost its ability to live and conceive. The young princes might have been able to shoot at the fish, so nimble limbed were they, but they lacked the strength to pass the first doors of the test.

That is when the young dark skinned prince of Ayodhya stepped up- they say his was a real humility of bearing that softened his eyes. Then how did he have the strength to lift the bow. It is thought that he had acquired strength also dutifully, being the embodiment of the perfect prince, and that therefore he had no vanity of it.

He lifted the bow softly as it might have been a woman's scarf. He tautened its string. Overwhelmed by this gentle handling, the bow yielded to him. Ram looked down into the water, and the first arrow he aimed brought down the fish. 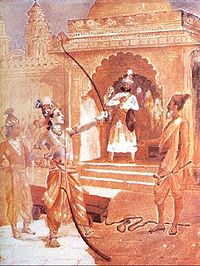 The daughter of Mithila went to Ayodhya to live out her destiny as the wife of Ram.