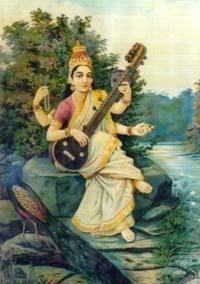 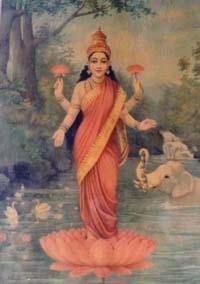 It is almost impossible to find an Indian who doesn't recognise the two above pictures of Goddess Saraswati & Goddess Lakshmi. But few people know that this type of artwork of neatly depicting the Hindu Gods and Goddesses, was started by Raja Ravi Varma (1848-1906). Prior to that the Indian paintings were crudely drawn and often disproportionate symbolic representations. as in the picture bellow.

It is Ravi Varma who first started painting the Hindu deities with proportionate bodies, clearly drawn neat features, appropriate ornaments and with natural appealing colours. At the same time he also maintained the descriptions given in the scriptures about the deities like four hands, holding a conch in one hand, lotus in the other etc. Hence they evoked a sense of serenity and spiritual feelings. He also started the The Ravi Varma Press in Bombay in 1894 to churn out copies of his portraits for an eager clientele. This came to be known as "calendar art" as later the Indian calendar manufacturers picked up and perfected the Ravi Varma style. For more than a century, hundreds of modern presses have turned out millions of religious pictures worth crores of rupees. And all of it - the art style plus its mechanical reproduction - goes back to one person - Raja Ravi Varma.

He was born in a royal family at Kilimanoor Palace as the son of Umamba Thampuratti and Neelakandan Bhattathiripad. At the age of seven years he started drawing on the palace walls using charcoal. His uncle Raja Raja Varma noticed the talent of the child and gave preliminary lessons on painting. At the age of 14, Ayilyam Thirunal Maharaja took him to Travancore Palace and he was taught water painting by the palace painter Rama Swamy Naidu. After 3 years Theodor Jenson, a British painter taught him oil painting. He is considered one of the world's most romantic and revolutionary painters of the 19th Century. He was a pioneer in introducing a new medium oil painting which is known till date. He was responsible in giving a new dimension to Indian painting, which was limited during that period. Within a span of ten years, he carved a niche for himself in painting, thus bringing laurels to his work not only in India but also worldwide. Most of his paintings are based on Hindu epic stories and characters. In 1873 he won the First Prize at the Madras Painting Exhibition. He became a world famous Indian painter after winning in 1873 Vienna Exhibition.

The romantic painter's poetic knowledge has been depicted in some of his paintings, one of which is displayed at Jaganmohan Palace Art Gallery - "Lady in the Moonlight". This painting is unique in itself because moon is used as a source of light helping the painter to highlight volume and mass of the form - Lady, in a resignation mood deeply involved in the thoughts of her beloved. The painting, "Shakuntala's love letter to Dushyanta", was a major turning point in Raja Ravi Varma's life since it was acquired by Lord Buckingham, the then Governor of Madras. Impressed by Ravi varma's work, Lord Buckingham got a life-size portrait of himself painted by the great artist.

For about 1905 to 1910, for photo-litho transfers, the Ravi Varma Pictures Depot relied on Phalke's Engraving & Printing (later Laxmi Art Printing), whose proprietor, Dhundiraj Govind Phalke, was, after a few years, to become dadasaheb of Indian Cinema, Chitrapat Maharishi.

In 1893, Swami Vivekananda brought his guru Ramakrishna's Parable to the World Columbians Exhibition in Chacago, USA. To the same World Columbian Exhibition, Ravi Varma sent his series of painting of Indian women, and he was awarded two medals.