The Smithsonian's cycle collection began in 1889 when J. Elfreth Watkins, curator of transportation, accessioned a velocipede. This vehicle was the third wheeled vehicle to be accessioned, having been preceded by a steam locomotive and a horse-drawn carriage. In the late 1890s, two other bicycles were loaned to the museum, but they did not become part of the collection. By 1918, only two more bicycles and two velocipedes were added to the cycle collection. The material in this tour is mostly based on a published source: the 1974 book Wheels and Wheeling: The Smithsonian Cycle Collection. That book was credited to Smith Hempstone Oliver and Don Berkebile. Oliver published a book on the collection, called Catalog of the Cycle Collection of the Division of Engineering, United States National Museum in 1953. Oliver's work was amended by Don Berkebile and re-published in 1974. At the time of its publication, Wheels and Wheeling: The Smithsonian Cycle Collection described 53 cycles (including motorcycles) from the National Museum of American History's collection. Janet Davidson condensed and edited some of the materials in this web version. This tour only includes the bicycles in the book because there is another tour on the website devoted to the motorcycle collection. It also includes a few bicycles that appear in America on the Move but not in the book. It is not a complete record of the bicycle collection, however, because it does not feature the other bicycles that have been collected since the book was published that did not make it into the America on the Move exhibition. 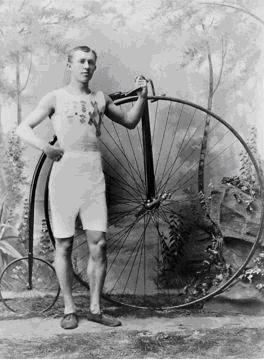 The origins of the bicycle are shrouded in mystery. It is not possible to attribute its invention to any single person. Still, what is clear is that the early ancestors of the modern bicycle were in use by the early 1800s. In 1817, Charles, Baron von Drais, of Sauerbrun, devised a front wheel capable of being steered. He also gave it a padded saddle, and an armrest in front of his body, which assisted him in exerting force against the ground. Granted a patent in 1818, he took his Draisienne to Paris, where it was again patented and acquired the name vélocipède, a term that was to continue in use until about 1869 when the word “bicycle” came into use. The velocipede gained rapid popularity in France, and almost immediately migrated to England. There, one of its chief exponents was the London coachmaker, Denis Johnson. Riding academies were established, and soon many riders were seen on the streets of London. But the pastime declined almost as rapidly as it had risen, and after the early 1820s, velocipedes were rarely seen. 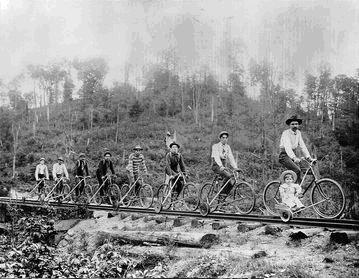 In the United States, W. K. Clarkson, Jr. of New York, was granted a patented for a velocipede on 26 June 1819, but it is no longer known what this patent covered, for the records were destroyed in the Patent Office fire of 1836. There is no evidence that the sport gained much popularity in the U.S. at the time. In 1863, in Paris, an important milepost in velocipede development occured when pedals were added to the front axle. This happened in the workshop of Pierre Michaux, but to this day is cannot certainly be said whether he or his employee Pierre Lallement is entitled to the credit. Lallement moved to the New Haven Connecticut, and in 1866 he was granted a patent for “improvements in velocipedes.” In 1868, the Hanlon brothers of New York, improved Lallement's vehicle. Americans began to show an immense enthusiasm for the velocipede in 1868. By early 1869, a number of carriage builders were making cycles. Numerous riding schools were established in many eastern cities, and the sport of riding became suddenly popular, especially among the students of Harvard and Yale Universities. The craze ended as suddenly as it began. By the end of May in 1869 the sport was dying. The reasons for the decline were that the cycles were heavy and cumbersome. There was no cusioning and the rider had to steer and pedal the same front wheel. Riding a velocipede took a great deal of strength and coordination. Cities also began to pass ordinances against riding on pedestrian sidewalks. Further use and development in the United States remained nearly at a standstill during the 1870s. 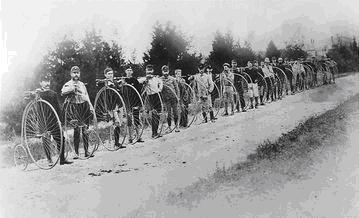 Participants in one of America's first organized bicycle tours, with their Ordinaries, on the road outside Readville, Massachusetts, September 11, 1879

By the early 1870s, bicycles and tricycles using wire-spoked wheels were commonly seen, notably in England. James Starley of Coventry introduced the Ariel in 1871, a high-wheeled bicycle with wire spokes that was copied for two decades. This type of cycle, with modifications, gained popularity and later became known as an “Ordinary” in the 1890s. Americans again became interested in bicycles, and began importing machines from England. Albert A. Pope became the first American bicycle manufacturer. In 1878 he began manufacturing bicycles under the trade name “Columbia” in Connecticut. The Ordinary, or high-wheel bicycle, was light weight and fast. But it was also hazardous, since the rider's center of gravity was only slightly behind the large front wheel and the rider was in danger of taking what came to be called a “header”—flying over the handlebars. Because of the Ordinary's inherent danger, efforts were made to design a safer bicycle. Some people tried to modify the Ordinary to make it safer, others put their efforst into redesigning the bicycle. The latter path won out as “Safety” bicycles became more popular. These cycles had two small wheels of equal size, a chain driver, and gears. Soon after the advent of the Safety bicycle, John Boyd Dunlop patented a pneumatic tire (in both England and the United States). Brakes were also improved in the 1890s. The number of bicycles in use boomed as production rose from an estimated 200,000 bicycles in 1889 to 1,000,000 in 1899.