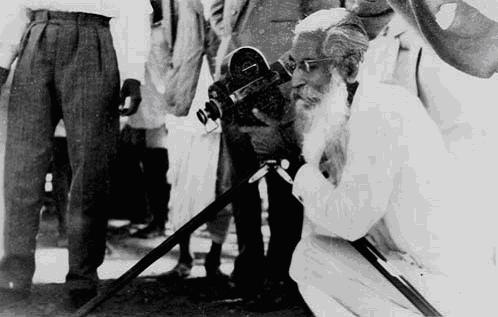 A master at sculpting, painting and woodwork - Baburao Mistry was called Baburao Painter by his legion of admirers! The lack of a complete formal education was inconsequential in the face of his awesome creativity. World War I had begun, but the magic of Phalke's Raja Harishchandra endured - Baburao and his cousin Anandarao bought a movie projector from the Bombay flea market and proceeded to exhibit films, studying the art of movies all the while. Anandarao was busy with assembling a camera for their maiden venture, and his untimely death at this juncture compelled Baburao to go it alone. In 1919 - Maharashtra Film Company set up. Baburao had borrowed from Tanibai Kagolkar, a long-time admirer, for the purpose and he also created his own movie camera. The studio itself had a family feel and many artistes lived there, in particular, his leading ladies - Gulab Bai (renamed Kamaladevi) and Anusuya Bai (renamed Sushiladevi). Baburao wrote the screenplays for his films and very systematically at that! He was also the first film - maker to adopt the method Einstein had described as 'stenographic' - he sketched the costumes, movements, and characters. This was a failproof way to put thoughts on paper. [This was the method Satyajit Ray adopted for Pather Panchali - there was no written script, just a book full of sketches. This 'script' is with Cinematheque Francaise, Paris.] A perfectionist, he insisted upon any number of rehearsals. As Zunzarrao Pawar, a cast member, said He would take umpteen rehearsals before actual shooting....but he was very slow in film-making. That was why we used to get annoyed with him sometimes. In 1920 - Sairandhri. This episode from the Mahabharata dealt with the slaying of Keechak by Bhima (one of the Pandava princes), and the film was based on the play Keechak Wadh by K.P. Khadilkar. [The play itself was banned because of the perceived criticism of Lord Curzon.] The intense realism of the killing was horrifying to the audience, and the scenes were deleted. At the time, censor boards had been set up! In 1921 - Surekha Haran. This was the debut film of V. Shantaram, one of the giants of Indian cinema. He played loard Krishna in the film. Publicity was not alien to Painter's many talents - in 1921-22, he distributed programme booklets complete with photographs and film details. In 1923 - Sinhagad. In 1924 - Kalyan Khajina. Together, Sinhagad and Kalyan Khajina won a medal at the Wembley Exhibition, London. One newspaper, Daily Express, described the films as full of strangely wistful beauty, and acted with extraordinary grace. In 1925 - - Shahala Shah.

- Savkari Pash. Savkari Pash dealt with moneylending and the plight of poor farmers. The unrelenting authenticity of the film did not appeal to an audience given to mythological extravaganzas. The film failed. Baburao Painter returned to the tried-and-true subject-matter. In 1927 - Netaji Palkar. Directed by V. Shantaram, the film was about Shivaji Maratha (a revered warrior-ruler who fought the Mughal emperors). In 1928 - Karna. The film was inspired by the MGM masterpiece Ben Hur. The advent of sound in 1931 did not excite Painter. Rather, he believed that visual excellence would be destroyed, and closed down Maharashtra Film Company. In 1935 - Usha. The film (a talkie) was directed by Painter for the film company Shalini Cinetone, Kolhapur. In 1936 - remake of Savkari Pash (as a talkie). In 1937 - Pratibha. In 1947 - Ramjoshi. A highly successful film.

Sinhagad - a landmark film. For one, Baburao shifted from painted curtains to multi-dimensional sets. Another first - he used artificial lighting to create the effect of fog and of moonlight. Also, the film was so very successful that the Revenue Department introduced Entertainment Tax with an eye to the film's box-office returns! The film was based on Hari Narayan Apte's novel Gad Aala Pan Sinha Gela. The protagonist Tanaji. was a follower of Shivaji Maratha and died while capturing Kondana Fort. While filming Sinhagad, Baburao fell off a horse, the injury causing a lifelong speech defect.

The beautiful posters that Baburao painted for his films prompted the advice of not wasting his talent on dirty walls, that an art gallery was the correct destination! Prophetic words indeed, because later his posters were up at J.J. School of Art, Bombay and much admired by the principal, Gladstone Solomon.

J.H.Wadia on the two versions of Savkari Pash : I faintly remember the silent Savkari Pash...But it was only when I saw the talkie version that I realized what a great creative artist he (Baburao) was. I go into a trance when I recollect the long shot of a dreary hut photographed in low key, highlighted only by the howl of a dog.