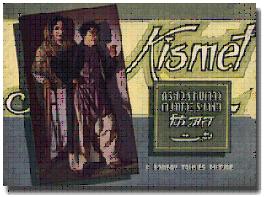 The boss's wife and leading actress of a leading Film Company runs off with her lead man. She is caught and taken back but not the lead man who is unceremoniously dismissed. So now the company needs a new hero. The boss decides his laboratory assistant would be the Film Company's next leading man. A bizzare film plot??? Hardly. This real life story starred the Bombay Talkies Film Company, it's boss Himansu Rai, lead actress Devika Rani and lead man Najam-ul-Hussain and last but not least its laboratory assistant Ashok Kumar. And thus began an extremely successful acting career that lasted six decades! Ashok Kumar aka Dadamoni was born Kumudlal Kunjilal Ganguly in Bhagalpur and grew up in Khandwa. He briefly studied law in Calcutta, then joined his future brother-in-law Shashadhar Mukherjee at Bombay Talkies as laboratory assistant before being made its leading man. Ashok Kumar made his debut opposite Devika Rani in Jeevan Naiya (1936) but became a well known face with Achut Kanya (1936). Devika Rani and he did a string of films together - Izzat (1937), Savitri (1937), Nirmala (1938) among others but she was the bigger star and chief attraction in all those films. It was with his trio of hits opposite Leela Chitnis - Kangan (1939), Bandhan (1940) and Jhoola (1941) that Ashok Kumar really came into his own. Going with the trend he sang his own songs and some of them like Main Ban ki Chidiya, Chal Chal re Naujawaan and Na Jaane Kidhar Aaj Meri Nao Chali Re were extremely popular! Ashok Kumar initiated a more natural style of acting compared to the prevaling style that followed theatrical trends. He absorbed and learnt a lot from the Hollywood films of the day and learnt that acting was not merely standing and saying one's dialogue but reacting as well. According to Film Director Tapan Sinha... "He is the man who showed that film acting is something else. He began to speak and to behave normally." In his early Bombay Talkies films, Ashok Kumar played the good clean-cut hero in a series of romantic films but Kismet (1943) changed all that. His role as perhaps the Indian Screen's first cigarette smoking anti-hero with the heart of gold remains his most famous screen role and the film ran for over three years in a theatre in Calcutta! That year, along with Shashadhar Mukherjee, Gyan Mukherjee and Rai Bahadur Chunilal he left Bombay talkies to set up a rival Film Company, Filmistan. He did return to Bombay Talkies as Production Chief and starred in one of their biggest ever hits, Mahal (1949), but the days of the studio were numbered. The 1950s saw Ashok Kumar score in a series of crime films with his trademark cigarette - Sangram (1950), Inspector (1956), Howrah Bridge (1958), Night Club (1958) to name some. This, balanced with the sensitive Naubahar (1952), Parineeta (1953) and Ek hi Raasta (1956) and the riotous Chalti ka Naam Gaadi (1958) ensured that he was the one actor who effortlessly withstood the Trimurthi of the 1950s - Dev Anand, Dilip Kumar and Raj Kapoor and more than held his own in the films they did together - Badbaan (1954), Deedar (1951) and Bewafaa (1952) respectively. His success continued with strong performances in Aarti (1962), Gumrah (1963) and an absolutely flawless one in Bandini (1963), matching Nutan's brilliant performance scene for scene. In the late 1960s after Mamta (1966) and Hatey Bazarey (1967), he effortlessly settled down to playing character roles. As a character artiste, Ashok Kumar took on all sorts of characters - the villain in Jewel Thief (1967), the sympathetic parent in Mili (1975), the lovable old man in Aashirwad (1968) (where his songs predated the rap phenomenon by decades!) and Choti si Baat (1975), the old comic conman in Victoria no. 203 (1972), the rapist in Jawaab (1970), the henpecked head of the family - Khubsoorat (1980). He was by now lovingly called Dadamoni by one and all. In the 1980s, Ashok Kumar cut down his work and apart from films, was seen occassionally on Television anchoring the vastly popular soap Hum Log or playing the title role in Bahadur Shah Zafar. However by the mid 1990s with age and ill-health he cut down on all work. Today his daughter Priti runs an acting school on his name. Besides acting, Ashok Kumar was a fine painter and also an active practitioner of homeopathy even solving certain complex cases that regular doctors couldn't solve! Dadamoni passed away in Mumbai on December 10, 2001 due to cardiac arrest.