Retracing the Legend of Tukaram, - By Dilip Chitre

March 4,1999, is a very special day for all Marathi speakers. It is the 350th Tukaram Beej. The first Tukaram Beej was the second day of the lunar fortnight of the waning moon in the Hindu calendar in 1650 AD. On the forenoon of this day, the greatest Marathi poet ever, performed his last kirtan and simply vanished. The Varkaris who regularly go on a pilgrimage to the sacred town of Pandharpur to celebrate the biennial festivals of their parent deity Pandurang, - believe that at the climax of his last kirtan, Tukaram bodily ascended to Vaikunth (Vishnu's heavenly abode).

There are alternative hypotheses about Tukaram's disappearance. One of them is that by some supernatural, paranormal force, Tukaram's physical presence just disintegrated, even as his fading voice kept ringing in the ears of rapt audience. This by no means a rationally convincing explanation. It only shifts the miracle from the realm of divine to that of the occult.

As a contemporary English translator of Tukaram's poetry and as a Marathi critic interpreter of the great poet, I have faced this mystery in my book Punha Tukaram (Once More Tukaram; Pune, 1900;Mumbai, 1995). My answer follows my deconstruction of a group of poems by Tukaram that I read as the poet's farewell to his friends and followers that may have been part of the text of his last kirtan. I imagine Tukaram leaving his audience rapturously singing the refrain of his last abhang or perhaps the Varkari chant Jai,Jai,Rama-Krishna-Hari or Pundalika Varada Hari Vithala.He had already told them in both literal and metamorphical terms that he was leaving worldly life for his final destination and that he had company 'upto Varanasi'.

In the 1937 cinematic classic Sant Tukaram that was adjudged one of the three best films in the world made that year, the very final scene in the great mythical eagle Garuda , Lord Vishnu's personal vehicle ,descending towards the bank of the river Indrayani at Dehu, Tukaram's native village, flapping its powerful wings. In their time, the duo of directors at Pune's Prabhat Studio - Vishnupant Damle and S. Fatttehlal- were the Indian film industry's equivalent of Luca and Speilberg. The trick photography scene of Tukaram's ascension to Vaikunth even by its naivete appeals to western cinema buffs. I had the privilege of presenting Sant Tukaram to a German group of film enthusiasts in Berlin in the spring of 1992.They were moved by the authentic folk-tradition transformed into an absorbing work of cinematic art. There was applause for the late duo of directors at the end of screenings.

The debate of Tukaram's intriguing disappearance 349 years ago has taken an unfortunate sensational twist in this, his 350th anniversary year, thanks to a new film based on scholar A.H.Salunkhe's recent book Vidrohi Tukaram (Tukaram the Rebel) announced by Nilu Phule. Nilu Phule is unanimously acknowledged as an outstanding stage and screen actor and a director with a 'purposive agenda'.Salunkhe's book revives a 50 year old sensational hypothesis that Tukaram was assassinated by his Brahmin detractors who themselves spread the canard about his bodily ascension to Vaikunth as a cover-up operation. This is not really a hypothesis for it is simply not verifiable. For that matter, every explanation of Tukaram's disappearance, including my own, is beyond testing. There is no contemporary eyewitness account of this event.

The murder 'theory' may make a very dramatic script. Many screenwriters love this kind of stuff, especially about a historical figure who has become an icon for his cultural descendants. Just as a scoop is dream stuff for a journalist looking for a short cut to the top, to a filmmaker such controversial material is a box-office bet worth taking. However I do not think Phule is the kind of filmmaker to whom financial success is welcome at any cost. As for Salukhe I have no intention of casting aspersions on his intentions either. However, I am tempted to examine his logic and would love to shred it to pieces. But that job has already been done, and brilliantly too, by a direct descendant of Tukaram himself - Dr. Sadanad More, this year's Sahitya Akademi Award winning Marathi author. Incidentally, the book for which Dr. More won the award is Tukaram Darshan gives a comprehensive historical review of how Maharashtra has received Tukaram so far. It uses Tukaram as a mirror of Marathi culture and society .

Dr. More has published a very comprehensive refutation of the theory of Tukaram's murder by Brahmins in an article carried by Maharashtra Times ( 28th February,Sunday). He has rightly pointed out how this theory would hurt the feelings of devout Varkaris. However, it must be said to the credit of Varkaris that they are liberal enough not to ask for a ban on what they do not agree with. This is unlike the Mahanubhavs, another Hindu religious sect, which has succeeded in getting banned the late V. B. Kolte's critically researched and comprehensively annotated edition of the 13th century classic of Marathi prose Lilacharitra. So I consider it extremely unlikely that Varkaris will react to any depiction of Tukaram's murder by Brahmins the way Ayatollah Khomeini did to Salman Rushdie's Satanic Verses.

The Varkaris are mild and tolerant and there is ample textual evidence to show that Salunkhe's Tukaram the Rebel was no one-dimensional social reformer or rabble-rousing critic of the Brahmins as a caste. Tukaram transcended communalism to include even Muslims among Vaishnavas and Sants and he wrote poetry in Dakhani Urdu in which Allah replaces his beloved deity, Pandurang. It is difficult to visualize such a saintly person hating an entire caste or community for any reasons. As Dr. More points out, half of the famous 14 accompanists of Tukaram in his legendary kirtan performances were themselves Brahmin. Tukaram's most famous disciple was the poetess Bahinabai; and she, too, was a Brahmin.

The fact of the matter is: Tukaram's poetry is as great a miracle as his life and his deeds that have now become part of the living folk tradition whose hidden significance has often eluded scholars and historians, literary critics as well as cultural commentators. He is quite simply the greatest missing person in the history of Marathi literature. 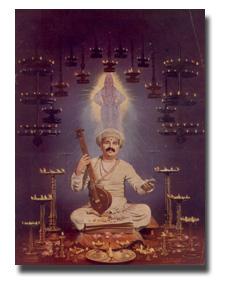 The story of Tukaram (Pagnis) a poet-saint of the village of Dehu in the seventeenth century who holds villagers spellbound with his songs of devotion - although his wife Jijai (Gauri) scolds him for impracticality and tells him he should be a better provider for their children. Tukaram is also beset by Salomalo, a jealous priest who passes off Tukaram's songs as his and launches a variety of plots against Tukaram. Divine Intervention rescues him and the villagers from several crises brought about by Salomalo. In due time great leaders come from afar to sit at Tukaram's feet; he resists offers for wealth himself and his family. When the day of Nirvana comes for Tukaram, a heavenly vehicle arrives to take him. He invites his wife to go with him but she decides she is happy with her modest home, her children and her buffalo and elects to stay on earth.

Sant Tukaram made in the Marathi language is one of the highest achievements of the early sound period of Indian Cinema. The film has charm and directness that sets it apart from other devotional films. Though the film shows miracles they merge with the reality due to the strong conviction of the filmmakers. Tukaram's conflict with his wife Jijai has an earthy believability and humour. He is no cardboard saint and she no mechanical shrew. In fact their characters are insightful and command our empathy. When her ailing son cries in pain Tukaram can only offer the name of Vithoba (his deity) to console the infuriated Jijai. She drags the child to the temple to settle scores with the deity. Her action is no mere dramatic flourish. In fact it comes across as genuinely felt emotion. Jijai with her common sense and practicality convinces Tukaram to leave his meditation and get down to hard labour to save the family from starvation. To her a husband must provide for the family yet her devotion to Tukaram is in no way less than those who regard him a saint. Her devotion is that of a wife, not a devotee.

The acting in the film shows a remarkable blending of the dramatic, the lyrical and the casual neo-realistic gesture. Pagnis a minstrel before he came to film so identifies with the persona of Tukaram that viewers came to regard him a saint. Gauri plays Jijai with such consummate skill that it is hard to believe she had joint Prabhat Film Company as a menial. Hers is a fabulous performance and it is she who is the life of the film. The film breaks new ground with her earthy portrayal who energetically squeezes cow dung cakes for fuel and refuses to ascend to heaven preferring to stay back and look after the children.

Other innovations include the extraordinary track shot introducing Rameshwar Shastri to the town showing the people work in cadence to a song. Care has also been taken to give the different characters a different language for e.g. the language in the sequences of the villain is dramatic whereas the speech of his wife exhibits utter simplicity and robust strength.