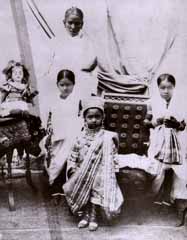 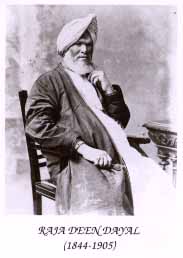 The glass plate negatives of one of India's pioneer photographers, Raja Deen Dayal occupy the bulk and pride of place in the IGNCA Archives. The collection is valuable as it is the complete collection of the original glass plates of the photographer who is a legend now. The period Raja Deen Dayal lived and photographed is one of the mot politically active periods in Indian history. From the point of view of historical value too, the photographs of Deen Dayal are valuable. In all, IGNCA has a breadth-taking range of 3000 glass plate negatives. The photographs by this extraordinary artist (1844-1910), present a gripping narration of the life and style of the late 19th early 20th century. Raja Deen Dayal was `Court Photographer' of Nizam of Hyderabad. Deen Dayal's clientele, naturally, consisted of the Royals, the British and the Brown Sahibs. The Maharajas and their Queens posed for Deen Dayal in their best attire. In a show of bravery, Mir Mohabur Ali Khan Pasha, the VI Nizam had his photo taken with the tiger he had killed (1891), Ladies and gentlemen listening to Phonogram, a big event in those days, had been duly captured in the frame (1891). A quiz question for a million could be to identify the office of the Western Railway at Marine Drive in Bombay, photographed by Deen Dayal in 1898. The majestic building is now lost in the jungle of hi-rise structures. The 1882 photograph of `Hindu Mandapa in Kutb' (Qutub) is also a marvel as it keenly reproduces the carvings on the stone pillars. 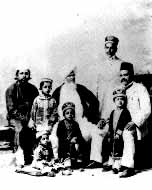 In an age when `quick photo' had not set in, the photography was a time-consuming and laborious process. Photo prints were made from glass plate negatives. Each negative had to be carefully prepared. The method used by Deen Dayal (prevalent then) to take negatives is called collodion process. When he started there was only wet collodion. But he graduated to a little more sophisticated dry collodion. The process is like this. Collodion is a photosensitive chemical prepared from the gun cotton plant. To prepare a negative, a glass plate was taken and a coat of binder was applied on it and on that a coat of iodised collodion. This, sensitized in a solution of silver nitrate was loaded onto the camera. The plate had to be exposed when it was still wet. Then it would be processed by the usual method of washing and drying. This method necessitated the carrying of dark room to the site of photography. 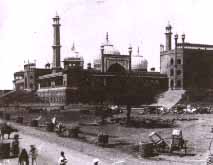 As technology improved, dry glass plates, already coated with collodion were available. This enormously helped, as now, one did not need the mobile dark room. From the glass plate negatives, by contact method, prints were taken. There was no scope for enlarging. The size of the photo was the same as the size of the negative. So if the requirement was for a big photo, big glass plates were used.

Deen Dayal hailed from Indore. He got recognition early in his life. In 1857, the then photographic journal "The Indian Amateur's Photographic Album' condescendingly reported that the photograph taken `by an Indian in Indore' "was considered a highly creditable production and of much interest, as an indication of the growing devotion of the natives of education and rank to cultivate intellectual pursuits. "His reputation grew and after being invited by the Nizam. In around 1885, Deen Dayal shifted to Secunderabad and started photography as business. He photographed the Nizam, his many palaces, the ceremonial parades, ornaments, furniture and maintained a scrupulous account in photo of the many receptions hosted by the Nizam for visiting dignitaries. Impressed with his photographic art, the Nizam bestowed on him the title of Raja. That's now Lala Deen Dayal came to be known as Raja Deen Dayal. 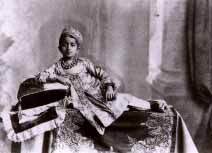 During his lifetime, Deen Dayal won many accolades. While the newspapers wrote about him, his work was among the exhibits at the World Colombian Exposition at Chicago in 1893. The `real' recognition came when Queen Victoria granted his firm Royal Warrant.

While the photographs of Raja Deen Dayal are remarkably superior in technology, in terms of their accurate reproduction, the perception of the photographer is also to be highly commended. On the one hand he pleased the rulers by photographing them. On the other, he did not miss the common touch. Some of his shots of buildings and temples speak for the fact that Deen Dayal had a keen eye, not missing on minor details.

So accurate was he that the Archaeological Survey commissioned him to work for it.

IGNCA has acquired the complete collection, along with the photographic equipment. (10x12 studio camera, an antique magnesium flash camera and some lens) from Deen Dayal's grandson Amir Chand and great-grand daughter Mrs. Hemlata Jain who were finding it increasingly difficult to preserve it.

The collection undoubtedly is a priceless treasure as IGNCA is the only Centre in the country, probably in the world, to house such a huge collection of glass plates. Come and peep into the past, through the mirror of the past, the glass plate records of Raja Deen Dayal, the legendary Photographer. 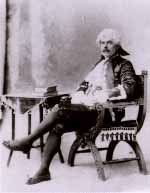 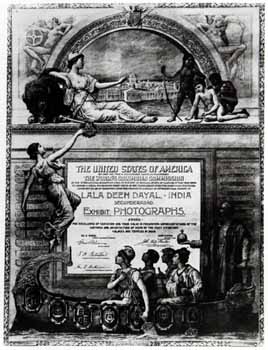 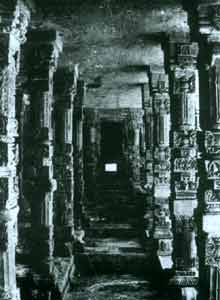 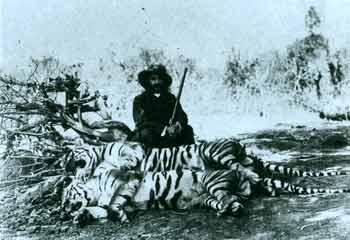