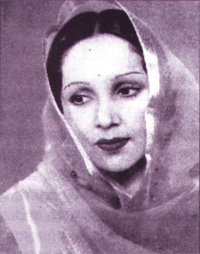 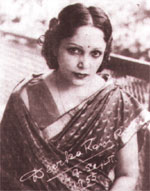 In her teens Devika Rani went to England where she won a scholarship at the Royal Academy of Music. Later she took to Textile Design and Decor and studied architecture. She began her career as Textile Designer with leading art studio in England.

It was in 1928 that she joined Himansu Rai's production unit, then producing silent movies, and accompanied him to India as his assistant. It was during the shooting of 'A Throw of Dice' on Indian locations when, despite the disparity in their ages, they were married. They then proceeded to Germany for a honeymoon combined with business, where their film was being processed and distributed by UFA.

Devika Rani's German experience stood her in good stead in later years. She sought experience in film craft from world-renowned German technicians, the likes of Pabst and Eric Pommer. She also received training as a stage artiste from Max Reinhardt. All of which helped her to assist her husband when he established Bombay Talkies in 1934.

Her first starring role was in the film Karma which Himansu Rai produced in English and Hindi. It was directed by J. L. Freer Hunt, and was Himansu Rai's first talkie.

Devika Rani starred in most of the early Bombay Talkies films, all directed by the German, Franz Osten. Her popularity helped establish the company's banner, and she won the popular sobriquet of First Lady of the Indian Screen. Her films included Jawani Ki Hawa, Mamta, Mian Biwi, Jeevan Naiya, Achhut Kanya, Jeevan Prabhat, Savitri and Vachan. She did not act for any other company, and her last starring role was in Hamari Baat, opposite Jairaj.

Following her husband Himansu Rai's death in 1940, the Board of Directors of Bombay Talkies Ltd., appointed her as Controller of Production, and she kept the banner flying high with such hits as Kangan, Bandhan, Jhoola, Punarmilan, Basant and Kismet.

In 1945, she quit films to marry the noted Russian painter, Dr. Svetoslav Roerich, and retired to his sprawling estate at Bangalore where she lived till her death in 1994. She associated herself with a number of cultural organizations, and maintained her link with the film industry, serving on the Censor Board for several years. She was an active member of the Sangeet Natak Academy, the Lalit Kala Academy, the Central Govt. Audio Visual Education Board, Handicraft Board and the Karnataka Chitrakala Parishad.

She was honored with the Padmashri in 1958, Soviet Land Nehru Award, the Jubilee Medal of the Bulgarian People's Republic and a special medal from Mrs. Indira Gandhi in 1981 instituted by the Indian Academy of Motion Picture Art & Science in recognition of her contribution to Indian Motion Pictuers. She was invited to inaugurate Filmotsav '80 at Bangalore.